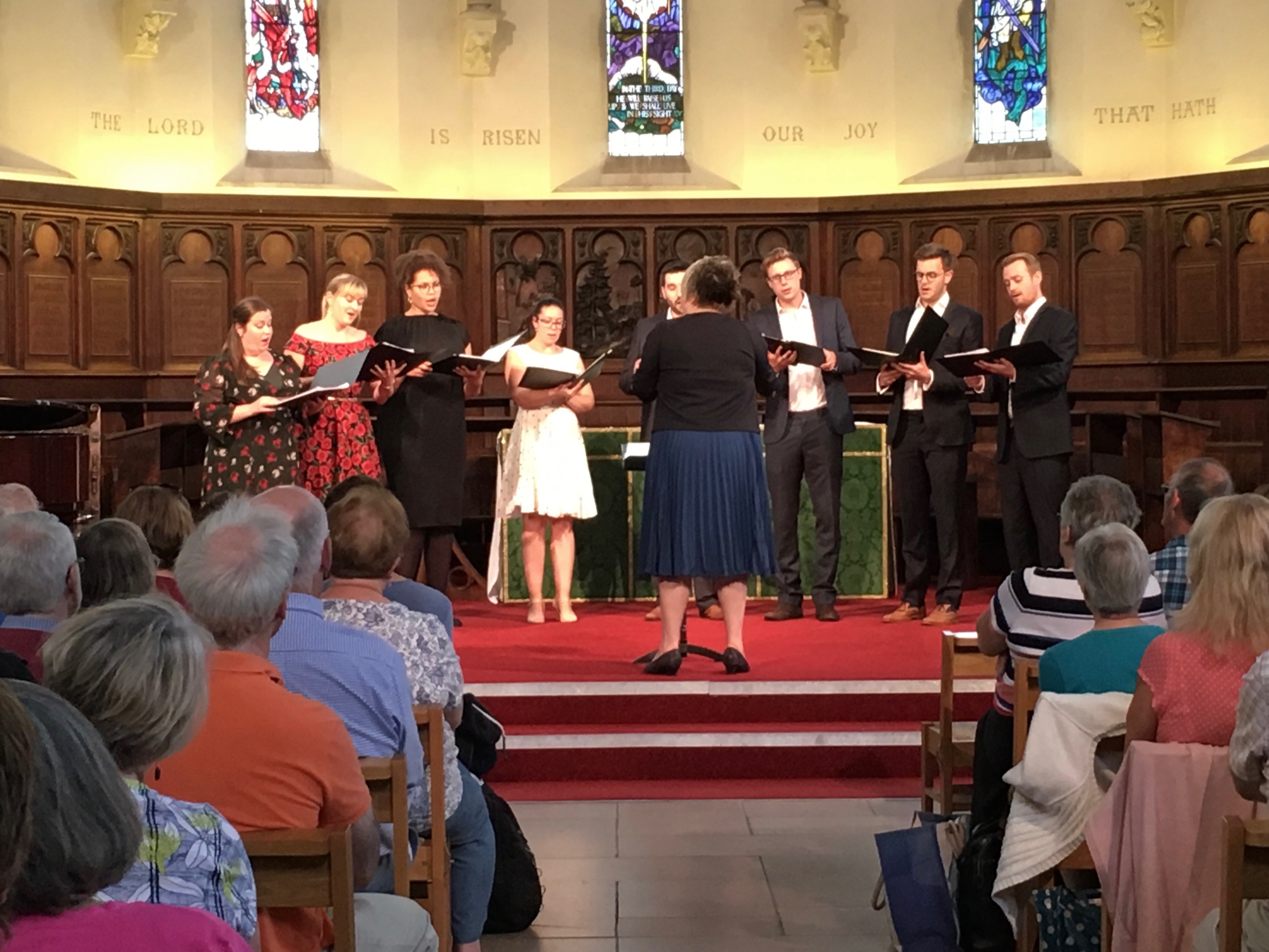 Well we can hardly believe a year has gone by since the last Summer School, but it has! This year we’ve moved from the University of Nottingham to Trent College. We wondered if those few extra miles out of Nottingham might put people off, but no! Bigger and hopefully even better than ever. A choir of 70+ and an orchestra of 80+ meeting together for three days of rehearsals, specialist workshops, Music in the Chapel concerts by visiting professionals, and the delegates’ showcase concert on Wednesday. With Trent College offering B&B, some folk have opted to stay over even though they live locally, making a mini holiday of it. Accommodation has also enabled others to come from further afield. There’s a cooked lunch for any who would like it and plenty of parking. We hear at least one person is staying not far away in a caravan. We’ll leave you to guess who…!

The guest tutors today were choral specialists Blossom Street. Tomorrow there is a violinist, and on Wednesday two brass players. Blossom Street, a chamber choir, formed 10 years ago when the singers were still students. They are now a London based and much praised choir, usually of 8, but sometimes 16 or even only four, directed by one-time singing member, Hilary Campbell. Another member is local Ellie Martin, who conducts one of our Daytime Singers groups. Five members gave a lively workshop that proved entertaining and informative. It improved the choir’s sound by helping singers give a more nuanced performance. Hilary spent a few minutes talking about the importance of diction, that it is part of the music, and just as the choir blends the pitch and timbre of its notes, it needs to do the same with pronunciation, matching vowel and consonant sounds not only within a section, e.g. tenors, but between sections when singing the same words at the same time. It’s all in the listening, just as it is with the notes themselves. Blossom Street also had delegates singing rounds. Not, however, a round of the same tune, rather five different tunes and from memory! Three other members arrived in the late afternoon to bring the first day to a close with a beautiful concert, picking up this year’s Summer School theme of music from the Americas. We went home uplifted and relaxed. Their interpretation and rendition of Holst’s I love my love and Whitacre’s Sleep were sublime.

And for the others… there were rehearsals for the full orchestra, string orchestra and windband with a variety of tutors. More about those groups in the coming days. Two more Music in the Chapel Concerts, open to the public, take place tomorrow and Wednesday. Tuesday, 5.15pm, Owen Cox, violin, and Hilary Suckling, piano perform a programme that includes Copland’s Appalachian Spring and Elgar’s Sonata. Owen is a great favourite at the Summer School. As a boy he played in MfE’s Stringwise, he now teaches at Cheetham’s School of Music and performs around the world. You don’t want to miss it. Nor Wednesday’s concert by two superb brass players at lunchtime 1.30pm. Click here for details.