The East of England Singers concert this coming Saturday – St John’s Church, Carrington, Saturday 17 October, 7.30pm – will open with music by Henry Purcell. Purcell, 1659-1695, was a prolific composer of instrumental and choral music and opera. His style would come to be termed English Baroque, and is captured in the statue of him erected in Victoria Street, London, to mark the 300th anniversary of his death. Glen Williams’ sculpture is titled The Flowering of English Baroque. 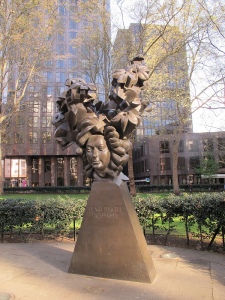 Purcell was the organist at Westminster Abbey at the time of the death of Queen Mary II in 1694. Although the Queen had requested that there be no state occasion upon her death, the outpouring of national grief led to a state funeral that cost, in the value of the time, £100,000. It took place on 5 March 1695. Purcell was responsible for the music. Scholarship now shows that although some of the music used during the service was by Purcell himself, much was by Morley and others. It is known that Purcell’s third version of Thou knowest, Lord, the secrets of our hearts, and his March and Canzona, were used during the service. His two other funeral sentences, which will also be sung during the concert, come from c1682, before Mary came to the throne. They were perhaps written for the funeral service of a friend. The third version of Thou knowest, Lord, has been used at many subsequent royal funerals, including that of Queen Elizabeth, the Queen Mother.

The March, Canzona, and three funeral sentences selected for the concert will give a sense of the solemnity and stateliness of Queen Mary’s funeral. The music is utterly beautiful.

Here is an extract sung by The Sixteen. Click here to see the full concert programme and to buy tickets.