Oh yes, we were given a pencil! And a wrist band and a delegate pack full of useful information before being welcomed by the ever Tiggerish Angela Kay and Robin Reece-Crawford.

Many moons ago, aged 14, I joined a small choir where one piece became my favourite, The Lover’s Ghost by Vaughan Williams. Imagine my joy when Apollo 5 opened the Summer School by singing this to us. Sublime. 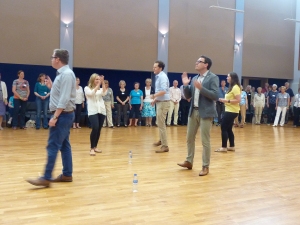 The group are not named after the space rocket but Apollo, the god of music, and the number of vocalists. They taught us using the Voce8 method. We limbered up body and brain, adopted a good singing posture and began building up layers, including the pop beat of Western music, rhythms from sub-Saharan Africa, Latin-America and India, sol-fa from Hungary (Who knew? Thanks Kodály!), Asian vocal inflections and melodic lines. We got physical, we got vocal, and we did all this in up to 7 parts. As the session progressed more delegates volunteered to co-lead a section. Some parts were beat-box or vocal percussion in sound, others melodic or to add harmony. Fantastic, and then we were ready for coffee.

We returned to Houston, I mean the rehearsal room, and took off with three new songs that used the techniques learned earlier. After a quick lunch (do bring a packed lunch, would be my advice) we were ready for Apollo 5’s wonderful concert. 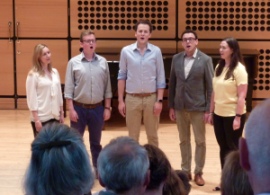 Clare Stewart, Greg Link, Alex Haigh, Ciarán Kelly and Charlotte Brosnan sang Dylan, Adele, Java Jive, Finzi, Bairstow, Sondheim and others with such attention to detail, listening intently to each other to keep the tuning and harmony tight, conveying the story of the lyrics and the emotion of the music. There was rapturous applause before we said goodbye. They set off to teach a lucky group elsewhere.

Apollo 5 are part of a music education charity based at the Gresham Centre, London.