Feeling the chill of winter coming on? Warm it up by booking for one or both of our opportunities for adults, or tickets for the Festival Chorus Concert.

Blow the Dust is for instrumentalists, including recorder players, on Saturday 7 January 2017 at Nottingham’s Albert Hall. We suggest Associated Board Grade 2 and above (or equivalent). You will play in different groupings of instruments to give you a wide and enjoyable experience during this orchestral playing day. If you play the recorder, any size of recorder, the ensemble meets in the afternoon only. For more details, click here.

What will we be playing?

The music has been chosen to give scope to players of all abilities and will include Berlioz’s rousing Hungarian March, Tchaikovsky’s lyrical Waltz from his Serenade for Strings especially arranged for full orchestra, the well known Trumpet Tune by Purcell and Elgar’s stirring Pomp and Circumstance March No 4.

There will also be items for windband (conductor Gill Henshaw) and string orchestra (conductor Ann-Marie Shaw). The recorder ensemble will have a varied diet of music carefully chosen by their conductor, Chris McDouall.

The Nottingham Festival Chorus event is spread over two weekends. The rehearsal course, always fun and a challenge to polish up those notes and your singing ability, will be led by Angela Kay, and takes place on Saturday 28 and Sunday 29 January at the Bluecoat Academy, Aspley. The final rehearsal and concert are the following Saturday 4 February in the Albert Hall. For more details, click here.

What will we be singing?

This year, there are two works. One of the favourites of the choral music repertoire, Haydn’s Nelson Mass, which is packed full of memorable themes and classic choruses. And then, from the declamatory opening to the final exultant flourish of chorus and orchestra, Dvorak’s Te Deum is a joyous whirlwind of vitality and excitement! We are delighted to welcome Marcus Farnsworth as guest conductor of the concert. What a privilege and treat.

Two hundred instrumentalists from Nottinghamshire and beyond gathered in the Albert Hall for a day of blowing the dust off their musical instruments. Participants of wide ranging experience played music selected and arranged for differing tastes and abilities.

There were more flautists than seats on a double decker bus, tootling beautifully, fine woodwind and brass sections, strings playing sensitively or with gusto (all those notes, and so fast!), and a trio of percussionists with sticks in mouths and/or on drums, triangles, cymbals and all sort. In another room the recorder group practised away on all five sizes of recorder, from sopranino to bass.

Repertoire included music for strings alone, for concert band, full orchestra, and for recorder group. The varied programme took us from Dowland to Bernstein, Elgar to Pirates of the Caribbean and, of course, Hucknall’s very own Eric Coates.

Blow the Dust will be back later in the year, so polish your trumpet, rosin your bow, search out your recorder etc. Whatever you play, there’ll be a part waiting for you.

for this evening’s concert, a buzz that continued through lunch eaten in the sunshine.

The lower voices rehearsed Stanford’s Songs of the Sea with Mike Gregory, and the upper voices learned the opening movement of Pergolesi’s wonderful Stabat Mater, which I have always wanted to sing. Jane McDouall gave us great tips for raising the soft palate for a bigger sound and ensuring the shape of the mouth is right for a richer tone.

But what of the instrumentalists? The saxophone group – 4 alto saxes and 1 tenor – were swinging some Gershwin.

Third from the left is Gill Henshaw, a clarinetist and one of the tutors and conductors. 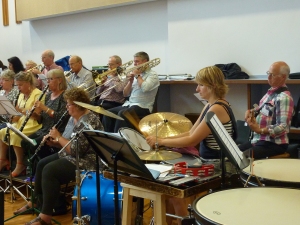 The Wind Band blew the years away with a medley of Beatles numbers.

Here’s Helen on percussion. Drum stick not in mouth at this point, but later. Sometimes two hands are just not enough.

And there’s Chris on bass. Wait a minute, isn’t that Chris on sax above?  Not in the picture, but blowing their hearts out, were the tootling flutes, oboes, saxes and a french horn. 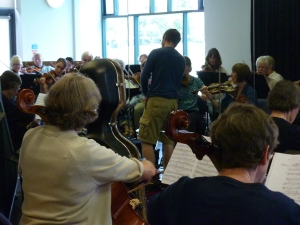 The strings ran through Peter Warlock’s Capriol Suite – ah, memories of school orchestra days, and isn’t there a piano version? A bit of trick photography in this shot – Owen didn’t have his back to anyone…!

After a final rehearsal, orchestra and choir together for the first time, we tucked into a wonderful buffet made by Jo from Beeston’s Local not Global Deli. Very tasty. 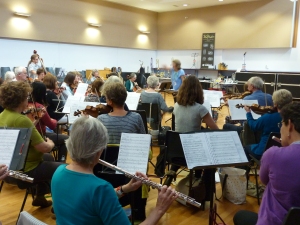 Today’s blog posts will be the bread either side of the filling that’s my dinner. Chicken salad. What a day!

Jane McDouall led a warm up for the SATB choir – keep the shoulders down and your face bright – as though greeting someone you’re pleased to see. Alex took over and we sang movements from Vivaldi’s Gloria, shaking off all ‘not quite awake’ feelings.

I slipped out to see what the orchestra was up to and walked into the tranquillity of Elgar’s Nimrod being played with great sensitivity. Hang on, though, what an unusual configuration of instruments! Strings as you would expect. Then how many? Yes, 13 or so flutes and a similar number of clarinets, but no one blaring out, the orchestra blending well under Angela’s baton. There were saxophonists, a tympanist, and to add to the loan double bassist, Chris McDouall on electric bass guitar.

The choir then split in two (no pain was involved, you understand). Sops and altos staying put,

and bases and tenors heading to another room. Jane and Angela introduced the ladies to music by Richard Rodney Bennett and Kodály – unison songs (written really for single voice) and songs for 5 part upper voices.

Once that was underway, I went in search of the lower voices – not all male, you understand, some women’s voices are naturally low enough to sing tenor. 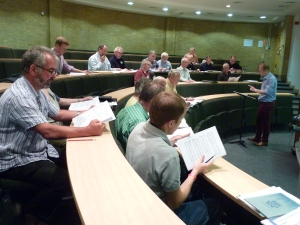 Their session was being led by a new-comer to MfE (I think), Mike Gregory, who is awarded quote of the day: ‘Sing it like Jeremy Clarkson would.’

I’m sure you can hear it already. Then again, looking at the picture… But once the ignition was turned… !