For a change of mood and style, let’s go to the opera. Alexander Borodin was a doctor and chemistry professor at the St Petersburg Academy of Medicine. This left him with little time for composition, and though he worked on his vibrant opera, Prince Igor, for 18 years, he was unable to complete it before his death in 1887, aged 54. Thankfully, his composer friends Rimsky-Korsakov and Glazunov set to work on Borodin’s manuscript. 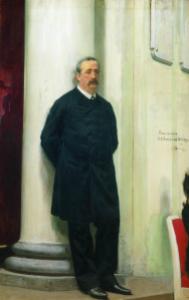 ‘Glazunov … was to fill in all the gaps in Act III and write down from memory the Overture  played so often by the composer, while I was to orchestrate, finish composing, and systematise all the rest that had been left …’ (from Rimsky-Korskov’s Chronicle of My Musical Life, 1909)

From the LBSO programme notes: Prince Igor is based on a Russian epic from the twelfth century. It recounts the story of the heroic Russian warrior, Prince Igor, who goes to war with the Polovtsi, a Tatar warrior tribe. When a sudden eclipse of the sun foreshadows the defeat of Igor’s army, the Prince is captured by the Polovtsi’s Khan, who attempts to seduce Igor into joining forces with him by means of the sensuous dancing of the Polovtsian slave maidens. Igor, however, manages to escape and rejoin his faithful wife.

We’ll be singing two choruses from the Act that includes the Polovtsian slaves – so up to 5mins 45seconds in the video, but enjoy the rest if you have time to. Might there be dancing on Saturday? Who knows!