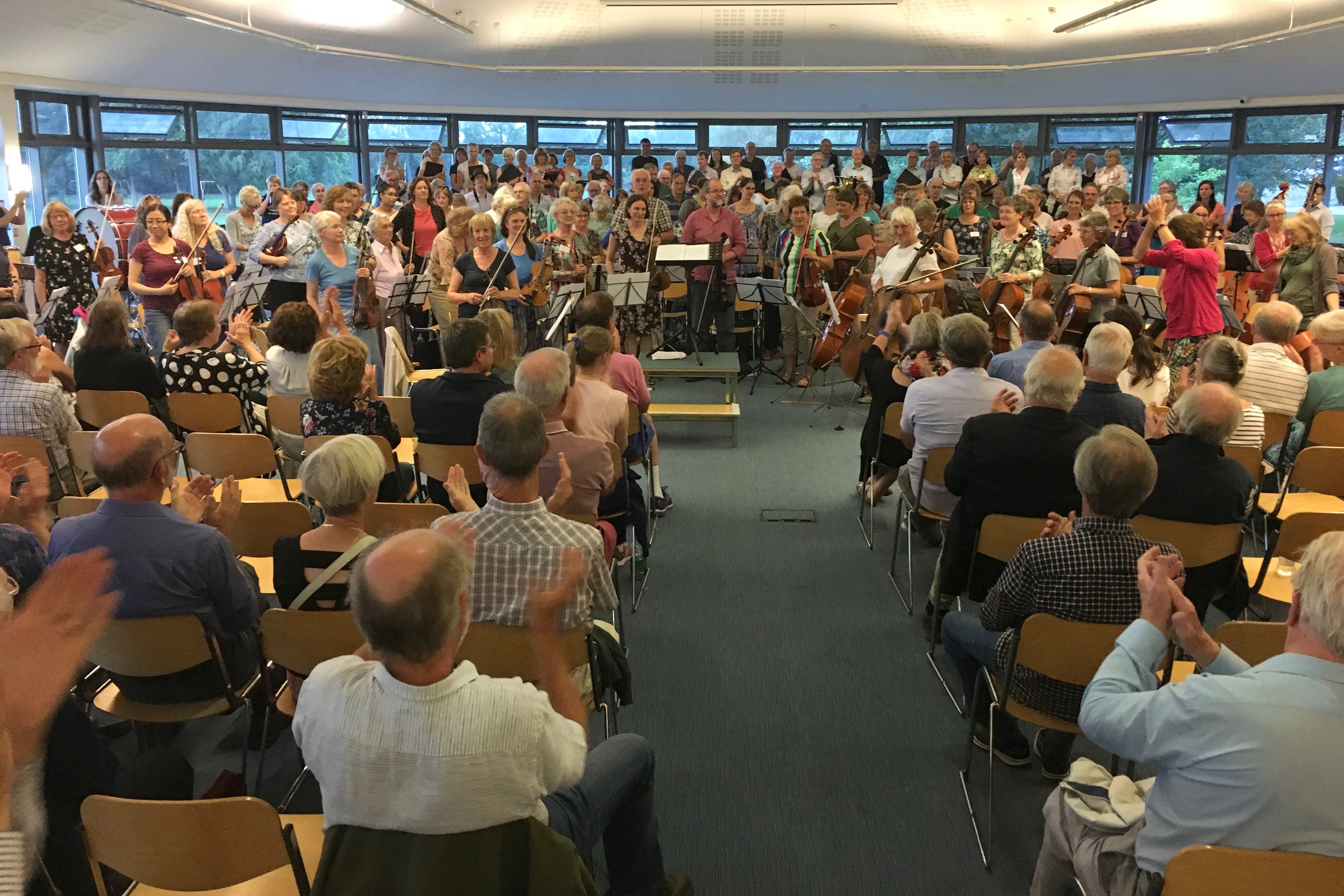 The third and final day of the Summer School saw all groups putting finishing touches to the pieces they would be playing in the evening Showcase Concert, open to friends, family and members of the public. This meant some joint rehearsals with choir and orchestra; percussion, piano and choir; orchestra and soloist etc. Brass, as requested by players attending previous Summer Schools, was also a feature of the day. Many music groups and organizations run Summer Schools but we think ours has a pretty unique offering. Not only do we ask top professionals along to give short concerts, but we also ask them to give workshops or masterclasses for appropriate delegates, today being the brass section. Any delegate can come along and listen in, and delegates often say they learn aspects of performance or about music that they can apply to their own but different instrument or voice.

Tim Thorpe (horn) and Simon Baker (trombone) have played in more professional orchestras than we have space to mention. Simon is currently playing in the West End show Kinky Boots! Each of them performed several pieces in the showcase concert, admirably and sensitively accompanied by our répétiteur for the School, Richard Cox. Simon opened with Kenny’s Fanfare and then spoke about his Nottingham roots, being a trombonist, the types of music he enjoys playing, and his friendship (and golfing rivalry) with Tim. Tim’s varied selection included a beautiful arrangement of Erik Satie’s Gymnopedie No 1. In both performances we were treated to the colours, ranges of sound and technical expertise of two wonderful performers.

The School’s brass section was joined by a few other players, including youngsters, for a workshop that led to a performance in the Showcase Concert. The importance of listening while playing (or singing) has been a thread running through all the workshops this year. Simon talked about the need for each player to listen out for when they had the tune, bring it out but ease the sound back when the tune passes to a different instrument. His top tip: Play confidently when sight-reading – blow through the notes – and don’t worry about the odd wrong one! He and Tim discussed the difficulties of finding a balanced the sound in a brass group given the different directions instrument bells point in – up the tuba and baritone etc, behind for the French horn, in front for trombones and trumpets.

We discovered on YouTube that Tim had performed an arrangement of Bernstein’s Somewhere from West Side Story. He very kindly supplied the orchestral parts and performed it with the orchestra in the Showcase Concert, picking up this year’s theme of Music from the Americas. And what a showcase it was of music spanning north and south America, from the 1600s right up to the present! Two of our young volunteers joined the party that was the percussion section in Sparkling Samba, conducted by Gill Henshaw. The Amercian theme opened the concert with a lively and fun performance of The Liberty Bell and closed it with the choir and orchestra thrilling the audience with a chorus from Bernstein’s Candide, conducted by MfE’s artistic director, Angela Kay MBE. There was much applause and appreciation from both audience and Trent College staff.

We were sorry to say goodbye to two tutors who have been very much part of the MfE family but are now moving on to pastures new – Victoria Barlow (choral) and Ann-Marie Shaw (strings). Thank you so much, and all the very best!

This year’s School came to a close with a social time over a hot buffet cooked by College staff. Trent College made us feel so welcome and facilitated what we hope was a great experience for all.